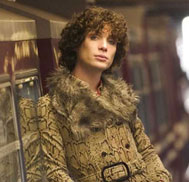 On Friday Vanessa and I went to see Breakfast on Pluto at the Ritzy in Brixton.

It was a marvellous little film by Neil Jordan, which left both of us feeling quite happy and uplifted, even though it's quite dark. It involves things like the IRA, police brutality and homophobia but they're a backdrop to "Kitten's" fantasy. She copes with the ugliness of the world by being superficial, and silly.

I enjoyed it more than Brokeback Mountain. I could relate to Kitten feeling an outsider and having to creater her own reality to live in. Cillian Murphy does a brilliant job, considering he's a straight man. He's pretty, too!
Posted by Little Miss Bitch at 15:56